Why does Switzerland lead the way in innovation?

back to all insights
News
Posting date: 29 August 2019

Switzerland has once again been named the world’s most innovative country, claiming the title for the ninth year in a row. The annual Global Innovation Index ranks 129 countries around the world based on 80 parameters, including regulatory environment, gross expenditure on research and development and mobile app creation, making it an extremely thorough overview of which nations are pushing ahead with innovation. And as innovation is one of the key drivers of economic growth and prosperity, it’s in every country’s best interests to strive for ongoing transformation and technological change. Here’s how Switzerland keeps coming out on top:

A history of new inventions

Switzerland has the most patent applications relative to population size anywhere in Europe, thanks largely to the dominant pharmaceuticals and life sciences sectors. Pharmaceutical giant Roche led the way for Swiss patent applications, followed by the ABB, Nestle and Novartis. Filing 956 patents per million inhabitants, Switzerland was leagues ahead of the Netherlands, Sweden and Denmark, which all filed around 400 patents per million inhabitants.

António Campinos, President of the European Patent Office, says Switzerland’s strong patent growth sets it apart from other European countries. “This emphasizes the outstanding innovation potential of the country, which continues to grow based on the rise of patent applications,” he notes.

The commitment to innovation is demonstrated in the Exhibition of Inventions, an annual event in Geneva where inventors exhibit their products to investors, and in Switzerland’s proud history of bringing new products to market. The nation is responsible for introducing the modern zip (known as the coil zip), Velcro, white chocolate, muesli and the Red Cross to the rest of the world – and don’t forget about the Swiss Army Knife.

Switzerland has always had a firm focus on investment in innovation, particularly when it comes to start-up business and new technologies. A new fund of up to CHF500 million is testament to this focus on entrepreneurship, with backers of the Swiss Entrepreneurs Fund pledging to close the gap between start-up and established company. 2018 saw venture capital investment in start-ups break the 1 billion CHF mark, increasing by 32% from 2017. ICT investment grew by 120%, with biotech, medtech and digital health also receiving significant investment. The finance sector has long been a target for investors, with Zug’s Crypto Valley serving as one of the global blockchain hotspots and a high proportion of both fintech and IT security start-ups.

With more than 300 start-ups founded in Switzerland each year, it’s clear that the nation’s propensity for innovation is only growing stronger. The CHF22 billion investment into R&D each year is further proof of this.

A modern approach to education

Switzerland boasts some of the top universities in the world, with both ETH and EPFL among the best in the world for robotics. The World University Rankings 2019 point to ETH Zurich being the second-best institution for computer science globally, with knowledge readily transferred between universities and the companies that surround them thanks to government funding of research and development.

The focus on education extends as far back as primary school, where new teaching methods are part of the daily routine and there’s an emphasis on teaching skills, as opposed to pure knowledge. Lehrplan 21 is part of this. The curriculum for German-speaking Switzerland specifies not just the content that must be learned, but also the skills that pupils should acquire, with emphasis placed on learning strategies and problem solving. As pupils move through the schooling system, they may encounter the Swiss VET (vocational education and training) system which sees training geared towards demand for vocational qualifications and the jobs available. With one of the lowest youth unemployment rates in Europe, Switzerland’s modern approach to education and training is clearly paying off.

Find your next job in Switzerland with Swisslinx

At Swisslinx, we partner with some of the world’s most innovative and forward-thinking companies across the recruitment markets of financial services, digital and technology and healthcare and life sciences. If you’re looking for your next role in one of the most exciting and inventive markets in the world, we’d love to help. Take a look at our latest jobs or get in touch to start a conversation. 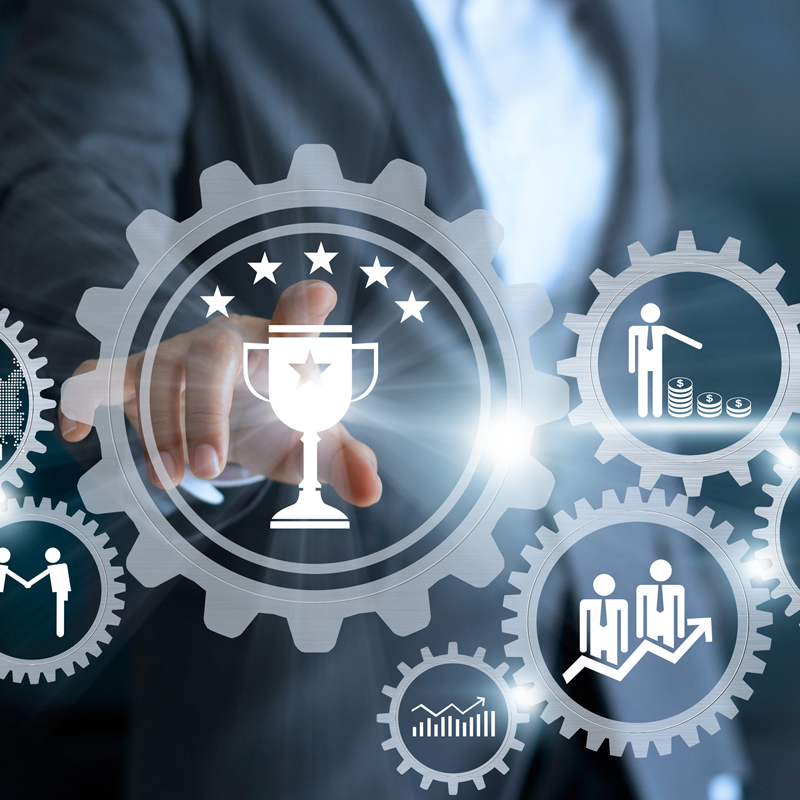 We’re delighted to announce that Swisslinx were once again awarded Best Supplier 2018 for the Roche HTS MSP program. As these roles are challenging to source and most positions are distributed to more than 10 suppliers on this account, this recognition is a huge achievement for us – particularly as it was our second year in a row to win.   The award is significant as the suppliers involved all have an even playing field when sourcing for the roles, most of which require a mix of both life sciences and IT knowledge. This is a niche skillset and the talent pool tends to be limited, which means there is huge competition for every position. While the roles can be difficult to source, we gave every position utmost priority and threw ourselves into the challenge. This included incorporating previous managers’ candidate feedback into our search criteria, treating our candidates fairly and maintaining professionalism and discretion at every step. Our reputation as a reliable, top-tier consultancy means we receive high calibre referrals for candidates we can place in the future.   Winning the accolade comes at an exciting time for our consultancy and contributes to our continued success in the ever-expanding healthcare & life sciences IT market. In today’s data-centred economy, our life sciences IT team is particularly busy sourcing and attracting the best talent in the field to enable our clients to use data to save and improve lives. We’re proud of our success in the hotly contested battle and would like to congratulate our fellow suppliers on what was a successful year for the program.   About Swisslinx’s Healthcare and Life Sciences team   Our Healthcare and Life Sciences team is active with clients all over Switzerland and focuses on the Commercial and Research and Development units in addition to our IT coverage. In the last 12 months we have completed four major projects for firms relocating offices to Switzerland, from talent mapping and compensation benchmarking through to search and selection and advising on employment contracts.     Are you a candidate looking for a job in healthcare and life sciences IT or a manager looking to add talent in your team? Then please contact us to start a conversation.

Doing business in Zurich: Trends to watch out for

Doing business in Zurich: Trends to watch out for Since being named as the world’s most sustainable city in 2016, Zurich hasn’t rested on its laurels, continuing to flourish as a place to both live and work. The social, environmental, and economic factors that led to the award are things that the city has long been revered for, but it’s not something that’s happened by accident. With a desire to maintain its reputation as a “centre of economic life and education” (a line coined by the official tourist site myswitzerland.com), investment in Zurich’s local infrastructure continues at pace, while being conscious of its environmental impact; the city is one of the lowest generators of emissions and consumers of water in Europe. Why Zurich attracts businesses and people While it’s regularly ranked as the second-most competitive financial centre in Europe behind London, uncertainties around the future of the UK could well play into Zurich’s hands. Already home to 10 of the world’s largest financial firms, the engineering hubs of tech giants and a giant data centre industry, a local startup scene has emerged attracting talent from amongst the 60,000 students who call the city home. While some will naturally be keen to move into an established household name business when they come out of education, the chance to be a part of something new and exciting is just as attractive to the modern workforce. Zurich offers the best of both worlds. Zurich’s low rate of 3.0% unemployment is on a par with the national average, below that of Basel (3.6%) and Geneva (4.9%) and far better than the European average of 6.8%. The business setup is there to cope, no matter how many people want to call the city home! Sensible city planning Of the 425k people who currently call Zurich home, 68% of them are of working age. That’s 2% above the national average in Switzerland and 3% above European averages. Those may sound like small margins, but in a city that’s seen annual population increases of 1.8% over the past decade, it may look from the outside to be a growing city with limited space to expand. In other regions that could create some serious logistical nightmare — over-urbanisation has a habit of pushing the cost of living way up — however, Zurich isn’t just any other city. The planning department at the City of Zurich recognised this trend well before it became a problem, implementing an active policy to make better use of abandoned industrial sites to provide affordable studio spaces and rehearsal rooms. This has seen great redevelopment in Zurich-West, where the former derelict buildings are becoming lively spaces full of contemporary art. Refurbished shipping containers have become pop-up retail spaces and dingy back streets and railway arches now house some of the most desirable restaurants and cafes in the city. Providing a launchpad While Zurich is home to many large corporate financial services organisations, such as UBS, Credit Suisse, Swiss Re and Zurich Insurance, it’s increasingly becoming known for its positive startup environment. Areas like Kreis 5 provide the perfect spot for coworking, and the many meetups, tech conferences and incubator schemes have helped fuel the thriving startup scene. With the close proximity to those making financial decisions, some for these companies can be expected to break out of startup mode in the coming years. Exactly who it will be is a matter for debate, but there are some strong contenders. Of course, the apple doesn’t fall too far from the tree, and within the financial sector companies such as Advanon and Wefox are attempting to challenge the traditional norms of the industry. The medical folk are arguably even more active when it comes to innovation, with Ava becoming a vital service for women across the world, and Versantis, Xeltis and Cutiss showing strength in the pharma and medical devices field. Whether it’s Selfnation in fashion, ComfyLight in home security, Nezasa in travel or Beekeeper in employee communication, every corner of the city has a potential ‘next big thing’ on its hands. For any company considering where to base their HQ, Zurich surely must close to the top of the list. Make your business move with Swisslinx As a specialist recruitment company providing talent solutions across Switzerland and internationally, we’re proud to stay ahead of the curve when it comes to technology and recruitment trends. With a Zurich base, we are active partners to new startups and larger organisations emerging in the city, and have a thriving network of skilled, vetted candidates ready to make their mark in this market. Find out more about what we offer here.

Since being named as the world’s most sustainable city in 2016, Zurich hasn’t rested on its laurels, continuing...

One of our international healthcare clients in Bern places strong value on hiring candidates not just for their IT knowledge and experience, but also on finding those with a friendly personality which suits their boutique environment. Very fortunately, thanks to our extensive database and network, we easily found a candidate whose profile, skills and attitude were the perfect match for our client. Swisslinx, the candidate and the client are delighted with the swift and efficient outcome of this process!

View other roles Rosie
is recruiting for
Post
Keyword: No Keyword
Options: No options
Location: